Look At What This Yoga Studio Is Doing For Homeless Cats!

It’s always touching to see a small businesses doing what they can to help animals in need. A no-kill pet shelter and a local yoga studio teamed up to help adoptable cats find a home. The results of this partnership were unbelievable.

Check out the article below

By Stephen Messenger – It’s (obviously) no secret that the company of cats is good for the soul, and that practicing yoga is too.

The results were amazing. Six adoptable cats from the shelter were welcomed into the studio, allowed to wander among the students and join in on the activity. “I love cats, so obviously it was going to be great,” yoga teacher Connie Pease told The Dodo. “It was an opportunity for people who like cats to help the shelter.” As fun as the class was, it resulted in more than just a good time. From just that one class, participants raised more than $500 for the shelter, money that will go a long way toward helping the other kitties who couldn’t join in that day.

One of the cats present has even since been adopted. For shelter volunteer Jeanette Skaluba, whose idea it was to put on the event, giving people the chance to interact with cats like this can make all the difference when it comes to finding them a forever home.

“A lot of people find shelters depressing, so they’re not inclined to visit,” Skaluba told The Dodo. “By taking the cats to something like a yoga class, people have the opportunity see and interact with them outside the shelter. It gives these cats exposure and shows their personality. I think people can envision these pets in their home easier because they’re outside the shelter.” Unlike dogs, says Pease, cats seem to want to hop right in when their humans are exercising:

“If you’re doing yoga, they enjoy it too. That’s the reason we put the yoga and the cats together. They’re just ideal companions.” 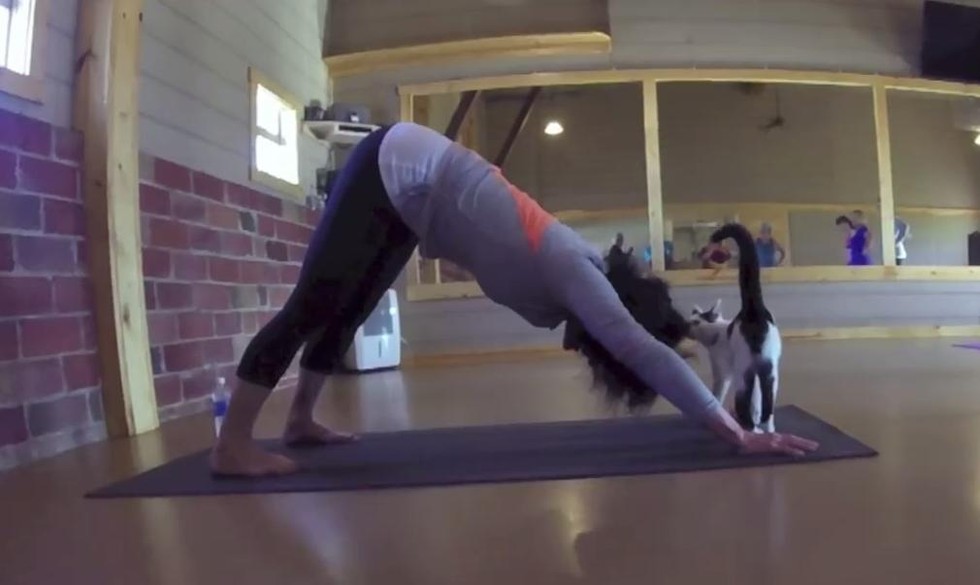 Skaluba and Pease say they plan on teaming up in the future for more classes like this involving cats — and they hope word will catch on in other yoga studios around the country about what a great idea it is.

“I felt so blessed to have the chance to do this. We had to step back and just say ‘wow,'” Pease said. “I don’t charge enough for yoga. To me it’s not about money, because I like helping people. But now that I can help animals become adopted, that’s a whole different world for me.”

Thank you for subscribing.

we respect your privacy and take protecting it seriously