These are five yoga poses that you’re probably doing incorrectly.

If you’ve been practicing yoga for quite awhile, you’re surely familiar with all of the basic poses and are able to flow through them with ease. However, many yogis think they have the poses down when they’re actually doing them incorrectly. Holding the proper form in each pose is essential to reaping the benefits that each has to offer, so if there’s a chance you’re doing a pose wrong, it’s important to correct it.

Below, yoga instructor Ashley Newsome shows us five of the most common mistakes in some of the most familiar yoga poses, and how to fix them. 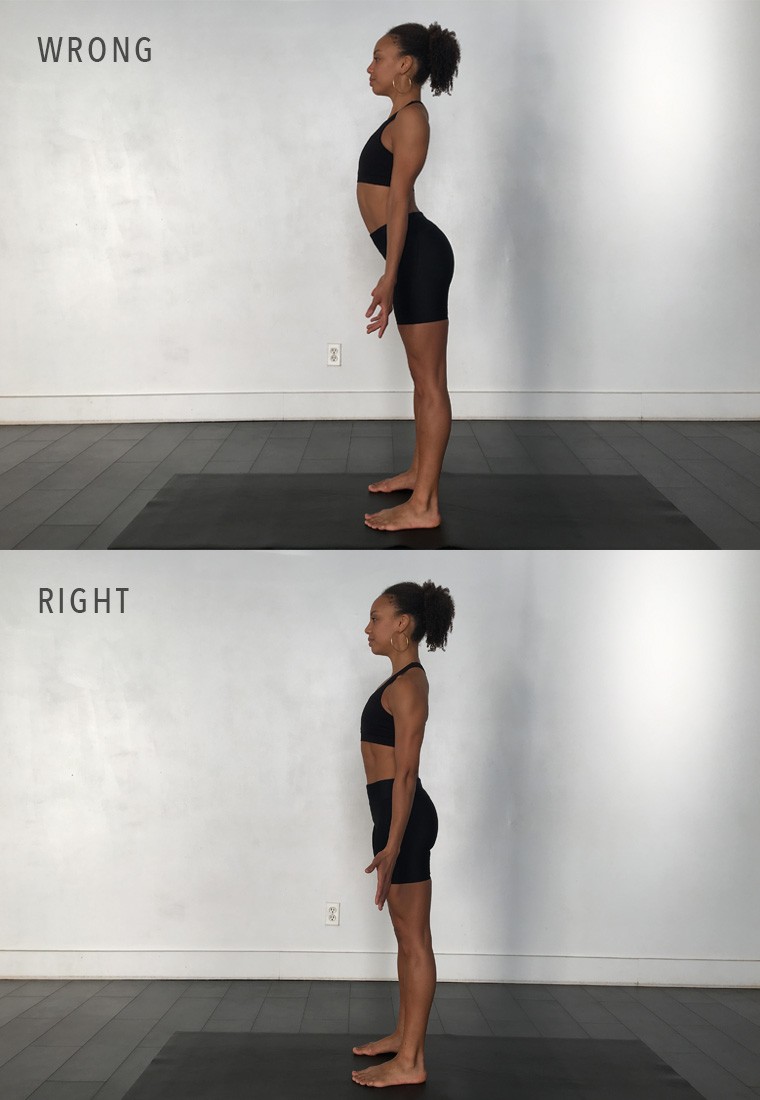 The common mistake: You’d think this one would be pretty straightforward, right? After all, you’re just standing there. Well, Newsome has some news for you: “Two mistakes I see all the time are overarching at the top of the shoulders and booty out,” she says. “People love to stick their butts out.”

The spine should be in neutral alignment, which means that even though your back has natural curves to it, you’re not overly exaggerating them. Why? Keeping the spine in neutral nudges you to engage your core more, creating a sense of stability and power.

How to do it right: Take a hip-width stance, grounding both feet. Lift your knee caps so you engage the tops of the thighs. “Send your tailbone down, and at the same time lift your low belly up toward your heart,” Newsome says. (This step will help you keep from sticking your butt out.) Pull both sides of your ribcage toward each other. Keep your shoulders soft and lengthen through your arms. And don’t forget to engage that core. 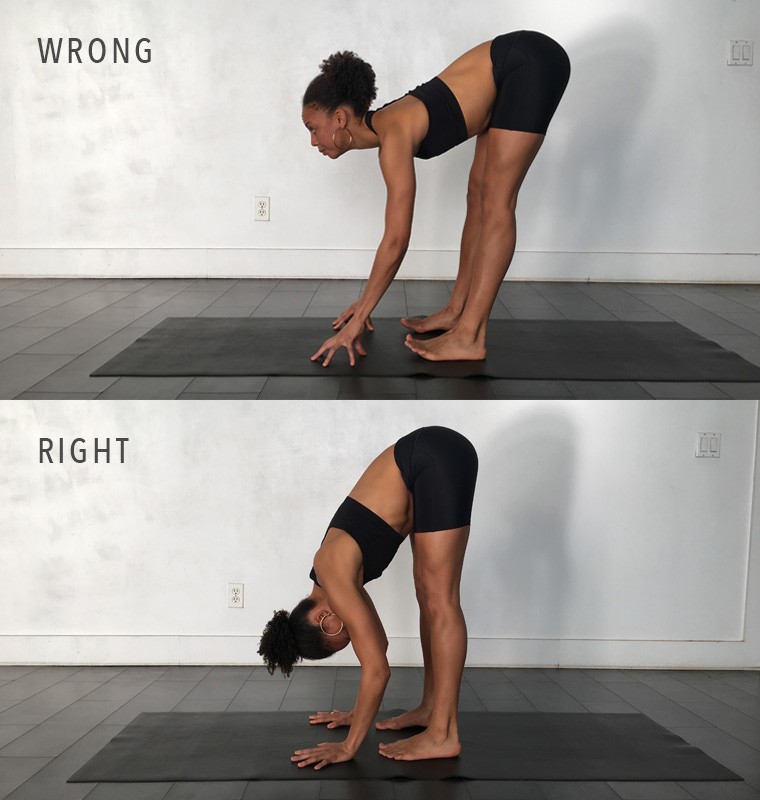 The common mistake: The major issue here, according to our expert, is that yogis aren’t holding their weight in the right place. “People love to throw their weight back into their heels,” she explains. This can be dangerous because it forces you to overuse your hamstrings—and if you’ve ever pulled a hammy, you know it’s not fun to recover from.

How to do it right: “What you want to do is rock the weight forward, so the majority of it is in the balls of your feet,” Newsome says. Hey, makes sense given this is a forward fold, right?

The common mistake: If you haven’t mastered plank in your fitness classes, chances are you’re bringing those mistakes onto your yoga matt, too. The problem, once again, is the butt. “People love to push their booties up in the air,” Newsome says. But the opposite is true, too. “I also see a lot of dipping in the hips,” she adds.

How to do it right: The key is to keep everything in one straight, diagonal line—from your heels to your hips to your shoulders. This works the core way more than if your hips are lifted (or grazing the floor). “If you aren’t strong enough to hold a plank, that’s totally fine—just lower your knees,” the yogi offers up. “Your core will still benefit from the move.” 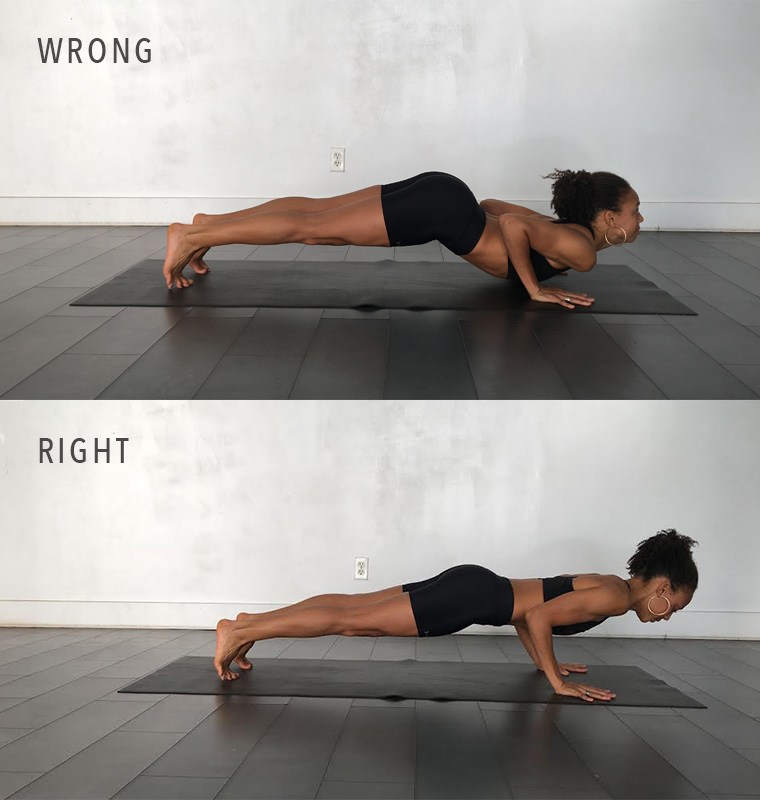 The common mistake: You might move into chaturanga a dozen (or more) times during one class, but Newsome says it’s a tricky pose because there’s a lot of room for error. (It might even be the most difficult intermediate yoga pose to get right.) “Most of the time you’re starting in plank, and one mistake I see is that people’s elbows go out, right, and left,” Newsome says. “But you want the elbows to guide back.”

One reason chaturanga gets a little sloppy is that people get tired halfway through class and cut corners. “If you’re exhausted, then you need to recognize that. But there’s a difference between being exhausted and being lazy,” she points out.

How to do it right: “You should almost feel your elbows sliding along your ribcage,” the yogi explains. Good to go? Next, move slightly forward on the balls of your feet. As you lower down, keep the ribcage in line with the elbows, though it’s tempting to lower your chest down further. This will help prevent the elbows from popping away from the body. 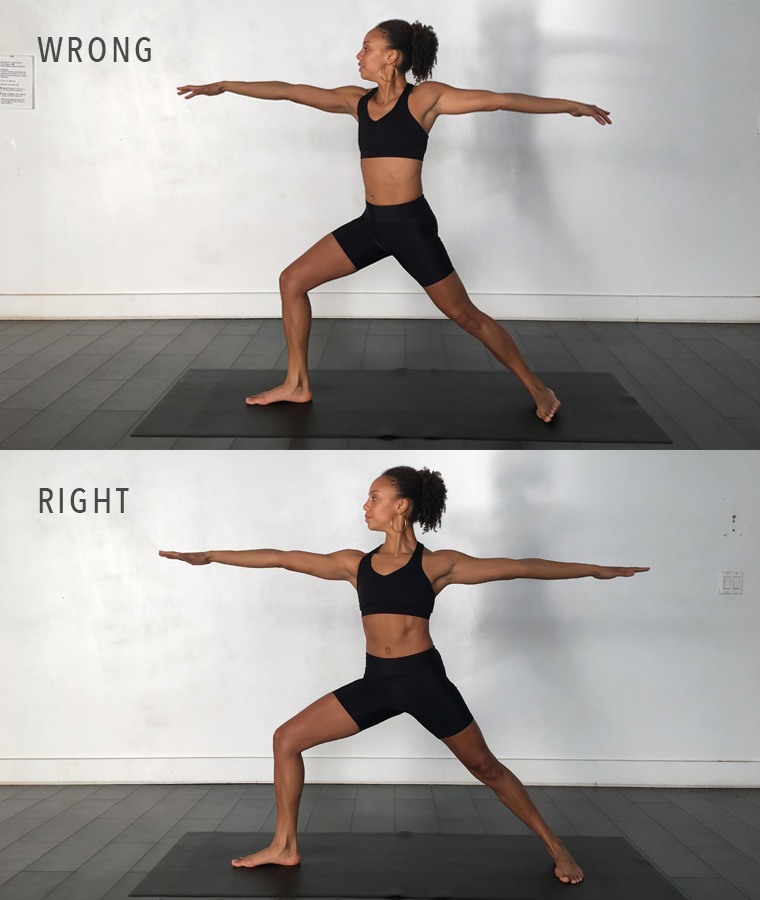 The common mistake: “I see the same misalignment for both of them,” Newsome says. “People love to pop the outer edge of the back foot up off the floor.” Another mistake: bending the back knee, which she says can lead to injury.

How to do it right: Ground down through the outer edge of your back foot, and keep your back leg straight without locking the knee. “Keeping the foot down engages the legs more, so you’re strengthening,” she explains. “But the number-one reason to do it, except to prevent injury, is for stability.” So next time you’re feeling off-kilter in warrior pose, check in from the ground up—like most aspects of life, having a firm foundation is everything.

All images courtesy of Ashely Newsome.

Thank you for subscribing.

we respect your privacy and take protecting it seriously